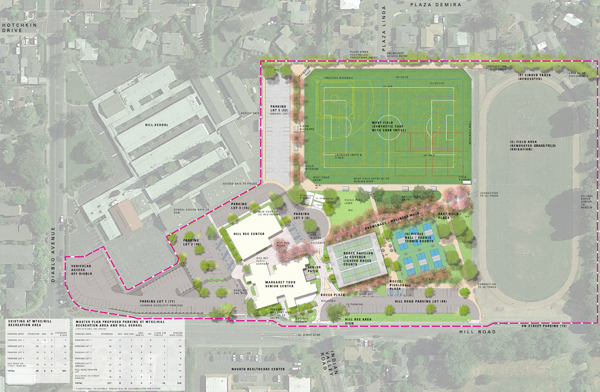 The Hill Recreation Area is located at 1560 Hill Road, and sits just east of the Margaret Todd Senior Center.

The proposed improvements will reduce ongoing maintenance costs associated with the existing natural turf, improve playability of the fields, beautify the park and better meet the youth athletic field and older adult needs in Novato. Expanded and renovated parking lots are recommended in order to meet the needs of the entire site, which includes the Hill Gymnasium, Margaret Todd Senior Center and Hill Recreation Area fields.

The next step in the process is to complete an environmental analysis. The Master Plan should be completed in late 2017/early 2018. The first phase of improvements will likely take place in 2018.

Of the six recommendations in the plan, one was  to make one-time investments that resulted in ongoing savings to, or revenue generation for, the City.

Two revenue-generating projects that are being considered include the proposed installation of a tournament bocce ball facility and improvements at the Margaret Todd Senior Center and the installation of a synthetic turf field. Both recommendations would add a new community asset while simultaneously generating revenue for the City. For instance, the bocce ball facility would cost approximately $500,000 to construct, including expenses for parking improvements to accommodate additional usage. Revenue generated by the facility is estimated to be $82,000 annually, and would require annual maintenance of approximately $35,000. This would result in $47,000 of net annual revenue to the City.

The City conducted a turf feasibility analysis to determine the best location for a synthetic turf field in 2016, and the preferred location was determined to be the Hill Recreation Area.

On August 9, 2016, the City hosted its third community design workshop for the Hill Recreation Area Master Plan-- which is also home to the Margaret Todd Senior Center and Hill Gymnasium. More than 70 people attended the meeting where the project consultant showed the preliminary conceptual drawings that resulted from the first round of community design workshops in May 2015. The majority of attendees liked and gave feedback on the conceptual design which includes synthetic turf fields (which would significantly  increase the amount of time available for field use throughout the year), bocce ball courts, a playground, walking path, pickleball courts and increased parking.

The City has received a lot of community input on needs and desires for park amenities, which has resulted in a project that will improve accessibility, field conditions and expand parking to better meet all of the needs at this 12 -acre City-owned recreation site.

At their March 28, 2017 meeting, the Novato City Council approved the conceptual design for the Hill Recreation Area Master Plan and the commencement of the environmental review process that needs to occur before construction begins. Additionally, Council directed staff to come back to Council with a funding strategy to implement the Master Plan.

At their meeting on June, 25, 2019, the City Council approved plans and specifications for the Hill Recreation Center, CIP 01-005, and authorized a bid advertisement.

At their meeting on September 10, 2019, the City Council awarded a construction contract for the Hill Recreation Area "Central Hub" Project (CIP 01-005) in the total amount of $5,497,245.60 to Ghilotti Bros., Inc.; authorized an agreement with FieldTurf Inc. through the California Multiple Award Schedule (CMAS) to purchase and install the sports field and bocce surface at $782,860 and $50,249, respectively; and authorized the City Manager to execute the same.

A Groundbreaking Ceremony for the Hill Recreation Area "Central Hub" Project was on Thursday , October 10, 2019.

On October 10, Novato staff and City Council gathered for a groundbreaking ceremony to kick-off the first phase of the Hill Recreation Area project.

Notice of Intent to Adopt a Mitigated Negative Declaration (NOI)

Sign up below to receive email updates. Note: select both Calendar and News to be notified of upcoming meetings and project updates.

Weigh-in Online
This topic was posted online on Open Novato for community input during the planning phase of this project. This topic is now CLOSED, but responses can be viewed at novato.org/opennovato.