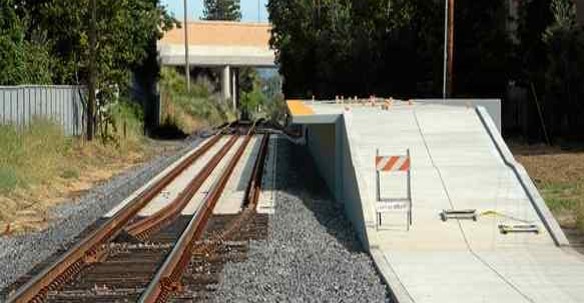 The City of Novato and Sonoma-Marin Area Rail Transit (SMART) are excited to announce the start of service at the Novato Downtown SMART Station. Please join us for a Ribbon Cutting Ceremony on Saturday, December 14, 2019 at 10:30am to commemorate the arrival of the first train at the Novato Downtown Station at Grant and Railroad Avenues. The event will feature a short agenda with guest speakers and light refreshments.

SMART is also hosting their annual Holiday Express Toy Drive on this day. To donate, bring an unwrapped toy or gift card to drop-off at the ribbon cutting event. Additionally, SMART is collecting toy donations all day Saturday, 12/14, on board the train.

Project design and construction for a functional Downtown SMART Station, where passengers can board on and off the train. The project will be completed in three phases, namely:

After completion of Phase 2, the Downtown Station will be functional SMART Station, where passengers can board on and off the train. SMART began service in August 2017, and will determine the Novato Downtown Station schedule based on ridership demand.

The Downtown Station provides a transit alternative to Novato residents, employers and employees, and allows for continued revitalization of Downtown Novato.

At the May 23, 2017 City Council meeting, Staff presented Council with alternative funding options for Phase II of the Downtown Novato SMART Station project. Council committed to funding the gap of $1.305 million from one of 3 sources:

At the May 9, 2017 City Council meeting, Staff recommended Council adopt a resolution for a grant funding exchange, allocation of $1,305,000 of additional City funds, and to adopt a standard resolution of support in order to fully fund the Downtown Novato SMART Station Phase II project. Following a split vote by Council, Staff was directed to return with alternative funding options.

At their January 26, 2016 City Council meeting, Council approved an initial phase of a Downtown SMART Station.

At the September 15, 2015 City Council meeting, staff was requested to agendize the City Council's consideration of funding a feasibility study for a Downtown SMART Train Station adjacent to the Old Train Depot at Grant & Railroad Avenues. The proposed Downtown Novato SMART station would be a third station for Novato--the other two locations are San Marin and Hamilton.

The requested hearing occurred on October 6, 2015 where Council directed staff to expend up to $100,000 in reimbursing SMART and their consultants for a service planning and engineering feasibility study, and bring the issue back for public consideration as soon as it was complete.

SMART staff and their team of engineers (LTK Engineering Services) and contractor (Stacy and Witbeck) have completed their engineering and cost analysis and provided two options--a full station and a phased-construction option. Another option for Council is to not proceed with a downtown station. The costs described in each option are preliminary estimates prepared by SMART.

At their Jan. 12 meeting, the City Council received a staff presentation  for the following options:

Option #1 - Full Downtown Station
The study estimates that the project design and construction costs for a functional downtown station would be about $5 million--resulting is three SMART stations in Novato.

Option #2 - Phased Rail Infrastructure Project
This option includes initial construction of track work and limited site work at an approximate cost of $2.6 million. Additional station and platform work would occur in the future—at an additional cost. This option may require the platform to remain fenced for safety and security until the station becomes operational at an undetermined time in the future. The balance of the site improvements could then be designed and bid at a later time, with the balance of the platform features, rail equipment, controls and integration. The cost of the first phase is estimated at $2.6 million.

Option #3 - No Downtown Station
The other option for Council is to decide not to invest in a downtown station.

WHY NOW?
The Novato City Council wanted to explore this possibility before SMART service begins at the end of 2016.

The City of Novato has some one-time funds that could be used for this proposed project. The funds are currently in several funding categories, some of which are already allocated to other projects while other funds are currently unallocated. The below funding possibilities are a complete list of potential City funds available for this project, not a recommendation to use any particular funding source. The City could use one or multiple sources listed below, including a blend of one-time funds and debt financing to complete the project.

Sign-up below to receive updates via e-mail and/or text message on this project.

Note: select both Calendar and News to be notified of upcoming meetings and project updates.