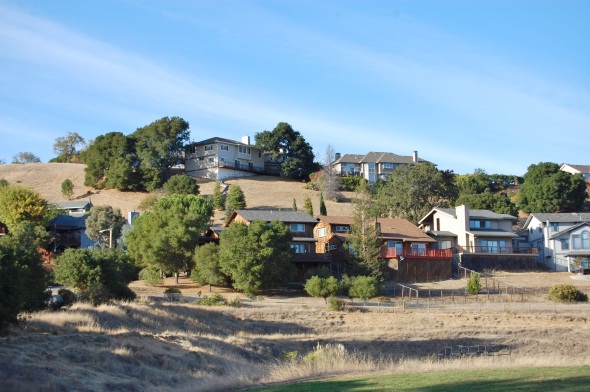 Maximum building size is determined using a sliding scale table based on average lot slope.  Residential lots with average slopes over 25%, and non-residential lots with average slopes over 20%, have no development potential.  Single-family homes are limited to a maximum size of 4,000 square feet with an additional 500 square feet for a garage or accessory building.  The City may grant an exemption to size limits under limited circumstances.

The Hillside and Ridgeline Protection Ordinance White Paper reviews the history of the ordinance and the effect the ordinance has had on development.  In general, the Hillside Ordinance has been very effective in reducing development on Novato’s hillsides over the past 13 years.  Nonetheless, the Ordinance can be inequitable, particularly for owners of existing homes and infill lots where the existing house and, in some instances, the surrounding neighborhood, was built prior to the adoption of the Ordinance.   The white paper discusses possible amendments to the ordinance to make it easier for existing homeowners to add on or modify their hillside homes.  The white paper also presents policy options to improve the definition of a ridgeline or create a ridgeline map, raise the slope threshold for application for the ordinance from 10% to 15%, and remove the maximum size limitation.

The Hillside and Ridgeline Protection Ordinance White Paper was presented to the Planning Commission on February 2, 2015 and to the City Council on March 17, 2015. The City Council supported creation of a ridgeline map and providing exceptions for residences built before the ordinance was adopted.