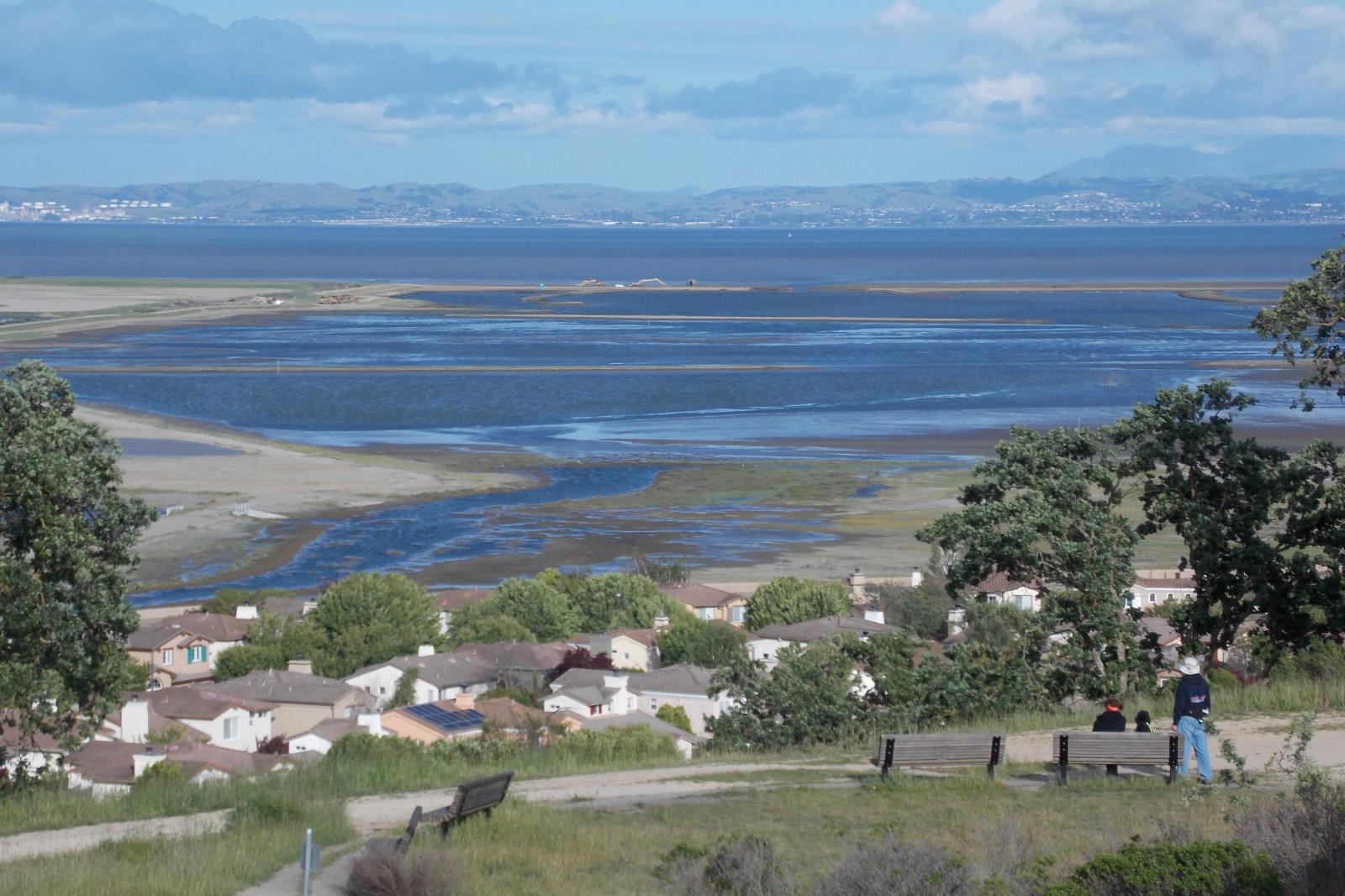 The Hamilton Levee was originally designed and built to provide flood protection to approximately 130 acres of existing and proposed development at Hamilton Field. The low-lying areas behind the levee include some properties that are up to two feet below sea level. The levee, at one time called the NHP Levee, is an earthen fill structure or embankment approximately 1.4 miles in length that was constructed in 1997 by the New Hamilton Partnership (NHP). The levee embankment is an integral part of Hamilton Levee “System” which is comprised of the embankment, a concrete masonry splash wall, a splash wall closure gate, two storm water pump stations, and an interior drainage network. 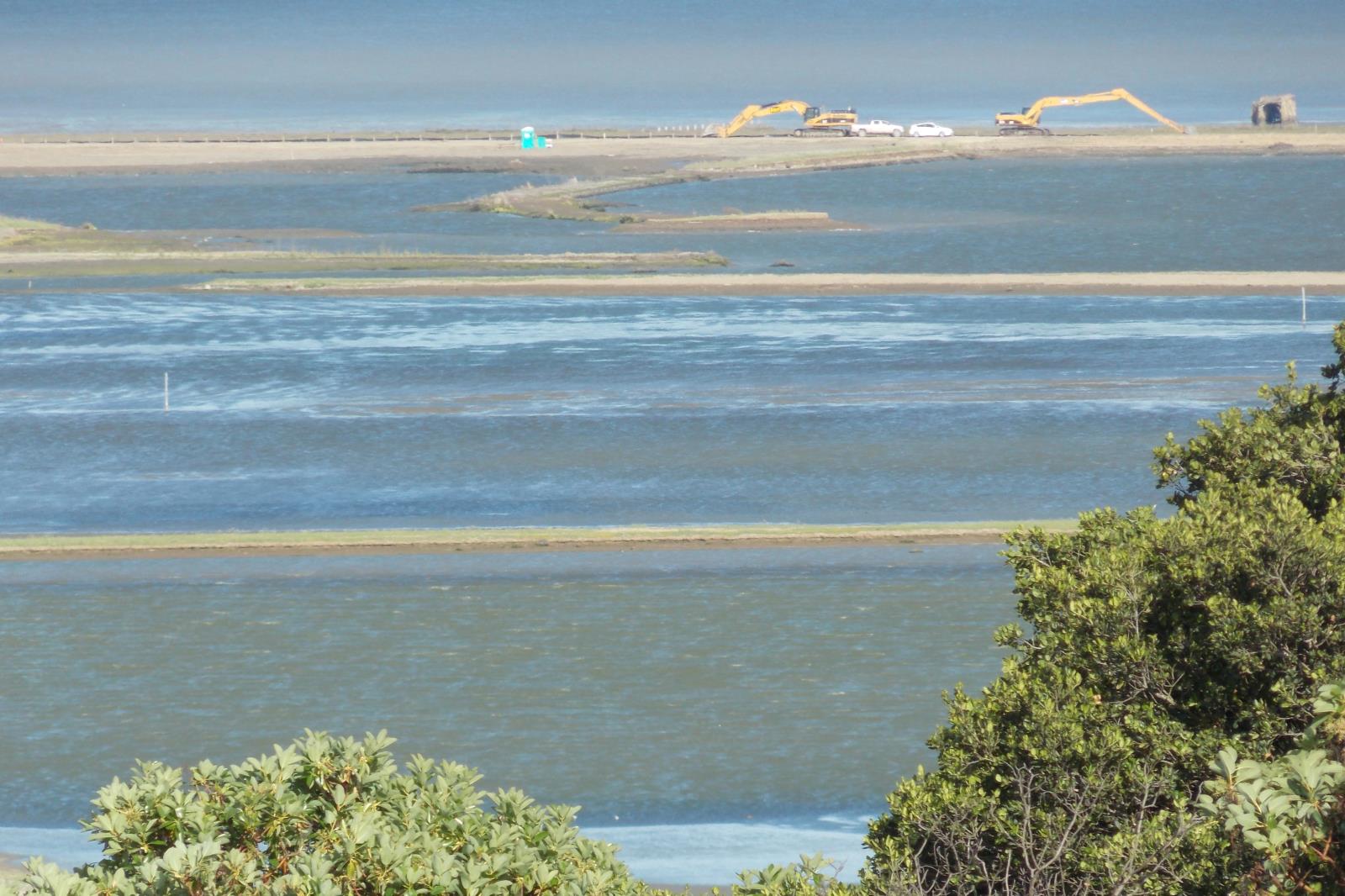 The City of Novato’s CIP Project Number 00-013 raised the crown of the levee by approximately 3.5 feet in 2007. The levee crown was raised to account for the future anticipated settlement while maintaining 100-year flood protection. In addition, the splash wall was raised approximately 4 feet.

On April 25, 2014, an outer levee that held back the waters of San Pablo Bay was breached as part of the adjacent Hamilton Wetlands Restoration Project (HWRP). As of this breach, the levee system directly protects residential subdivisions, park and recreation facilities, museums, businesses, the U.S. Coast Guard Pacific Strike Team, and the associated public right of way improvements from San Pablo Bay.
Photos above courtesy of Hamilton resident David Brewer

Please see the Community Facility Districts  page and the 2014 Presentation re: Hamilton CFD and Levee for more information.

Drainage from the properties protected by the levee is collected in a gravity drainage system and flows to one of two pump stations. One pump station is located along Pizzaro Avenue (Bayside subdivision) and the other pump station is at the south end of Hangar Avenue. The pump stations discharge the water to the bayside of the levee, which is now part of San Pablo Bay.

Routine maintenance work on the levee and the pumps stations is conducted in conformance with the Inspection, Monitoring, and Maintenance Manuals. This work includes routine inspection of the levee structure, wave run-up wall, and the recently installed seepage collection system. The embankment grass is periodically mowed and any holes in the levee crest are filled. At the pump stations, maintenance includes weekly inspections of all pump station components and periodic testing of the equipment. The City conducts routine surveys of the elevation of the top of the levee. The purpose of the levee surveys is to monitor the gradual long-term settlement of the levee due to the consolidation of the underlying bay mud materials.

Non-routine maintenance work to the levee has been performed, also in conformance with the Inspection, Monitoring, and Maintenance Manual. This work has included the Levee Raising Project in 2006 and the Seepage Collection System Project in 2009-2010.

Shortly after construction in 1997, the Federal Emergency Management Agency (FEMA) determined that the levee satisfied the minimum floodplain management criteria established under the National Flood Insurance Program. FEMA issued a Letter of Map Revision (LOMR) which removed the properties behind the levee from the Special Flood Hazard Area (SFHA). In 2007, the levee system was “accredited” by FEMA as providing 100-year (a 1 percent chance of being equaled or exceeded in any given year) flood protection to the surrounding development. In 2014, FEMA issued preliminary flood maps depicting a new higher base flood elevation (BFE) at the levee boundary as well as other parts of Marin County. The City is preparing a submittal to FEMA for re-accreditation of the levee system as required when a new BFE is established. This re-accreditation is expected in late 2015, early 2016.