Starting July 1, 2020, the minimum wage within Novato city limits will increase based on business size to:

The Novato minimum wage applies to each employee who performs more than two hours of work in a particular week within city limits.

This local minimum wage increase is part of a phased approach that allows all employees in Novato to reach a $15 minimum wage one year earlier than what the State of California law requires. An official notice of this increase was provided to Novato businesses with their business license renewals in December 2019. The Official Novato Minimum Wage Notice is required to be posted in a location visible to employees, and is available for download in both English and Spanish.

The State of California minimum wage is scheduled to increase each year until a minimum wage of $15 per hour is reached in 2023 for all employees.

At the City Council meeting of January 15, 2019, Councilmember Eklund proposed an item, and received unanimous support, to conduct a work study session regarding accelerating the minimum wage increase citywide.

On July 23, 2019, the City Council discussed the proposed minimum wage acceleration in a work-study session. Staff was directed to return to the City Council with an ordinance, including several options for Council to consider.

On August 27, 2019, the City Council discussed the potential ordinance accelerating the State's scheduled minimum wage increase in Novato. Introduction of the proposed ordinance was postponed until September 24, 2019 to allow for additional time to collect feedback from the community on the draft ordinance and proposed acceleration schedule.

The Novato City Council adopted Ordinance 1653 at their meeting of October 8, 2019.  Ordinance 1653 includes an accelerated schedule as shown below, with a minimum wage of $15 per hour reached in 2022 for all employees in Novato. Once the minimum wage reaches $15 per hour, the rate will be adjusted based on CPI-W for the San Francisco-Oakland-Hayward Consolidated Metropolitan Statistical Area or its successor index which is published by the Department of Labor, or 3.5% whichever is less. 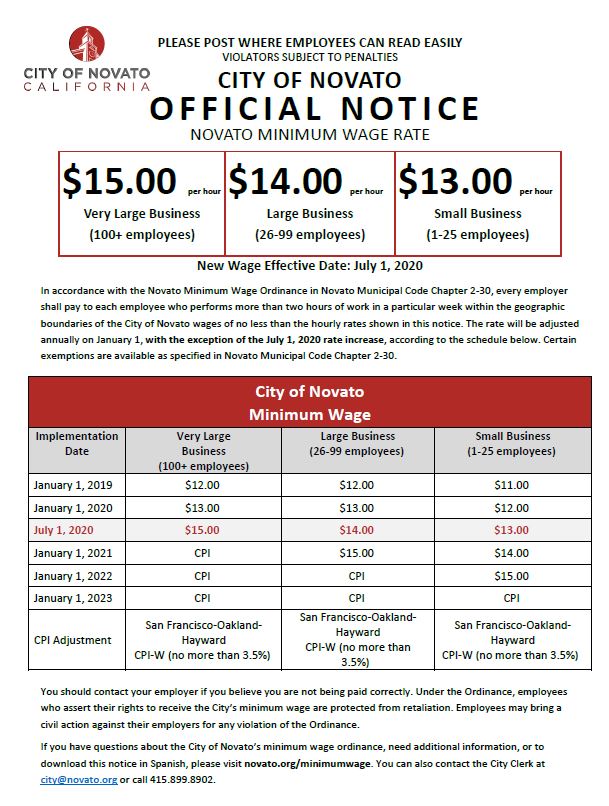 See the results of our online survey.

The Novato City Council considered feedback at their September 24, 2019 meeting.

Sign-up below to receive updates via e-mail and/or text message on news and events related to this topic.