At their meeting on November 28, 2017, the City Council provided staff direction to begin a Request for Proposals (RFP) process(es) for four City-owned parcels in Hamilton including:

This is the first step in a comprehensive process that may lead to reuse/redevelopment of one or more of these four sites.

Next steps will include bringing back a detailed plan for a proposed RFP process to Council for discussion and review. The details will include a timeline, community engagement plan, and a layout of the review and selection process.

Council requested that the RFP(s) allow for multiple options such as City Retention and Reuse, Sale (which could be to a public entity, private entity, non-profit, etc.), Lease, Public/Private/Non-profit Partnership, or Public-Public partnership.

Any reuse/redevelopment of these sites will occur only after a comprehensive public engagement process, environmental review and noticed public hearings before the Design Review Committee, Planning Commission and City Council. Decisions will not be made without significant input from the community throughout the entire process for each parcel.

In 2001, the City of Novato received 35 acres of land at Hamilton Field, a former military base, from the federal government through the Federal Lands to Parks (LTP) program, a program that helps communities create new parks and recreation areas by transferring surplus Federal land to state and local governments. To date, the City has invested over $5 million to redevelop approximately twenty-five acres of that land.  New community amenities include a renovated historic amphitheater, pool and cabana; several new ballfields; a community center with arts, dance, and other recreational programming; two new children’s play areas; and other support facilities such as bathrooms, parking lots and utility infrastructure improvements.

However, several areas, including two historic military structures, remain undeveloped due primarily to the large investment needed to utilize these sites and deed restrictions placed on the land that effectively prevent private investment.

The following three sites are currently encumbered with deed restrictions resulting from their transfer to the City as a public benefit conveyance through the federal Lands to Parks (“LTP”) program:

The encumbrances on these sites include restrictions which:

The effect of these encumbrances on the sites—that are currently unimproved, dilapidated and in need of significant investment—make it infeasible for private investment.

In 2011, the Trust for Public Lands (“TPL”) approached the City to determine if it had any interest in purchasing approximately 93 acres of land on the southern border of Novato. The land, currently undeveloped, ecologically valuable, and beautiful, was zoned as residential and at risk of development. This offer represented a potential solution to the challenge of revitalizing the Hamilton LTP Properties. The City proposed to purchase the 93 acres/TPL property and exchange it with the National Parks Service, for an end result of lifting the restrictions encumbering the Hamilton properties

As part of this exchange, the BOQ site would be split so that the Hamilton Pool and other recreation spaces on the site will remain in the LTP program, while the Bachelor’s Officers Quarters, the Officers Club and surrounding areas will be unencumbered. The exchange will also leave in place the requirement that any improvements to the historic structures on the sites--the Hamilton Theater and the Bachelor’s Officers Quarters--be constructed according to the Secretary of Interior Standards for the Treatment of Historic Properties. This exchange would permanently preserve 93 acres of beautiful hills and wetlands surrounding the Marin Valley Mobile Country Club while freeing the blighted historic properties in Hamilton of the encumbrances hindering their redevelopment and revitalization.

The City negotiated the proposed exchange with the NPS, the General Services Administration and the Department of the Navy and arrived at a solution that is acceptable to all parties. The federal government approved the exchange documents.

On March 15, 2016, the City Council approved the Hamilton Federal Lands to Parks Exchange, lifting deed restrictions from these properties and adding 93 acres of open space to Novato. The intent of lifting those restrictions was to allow for private investment in order to rehabilitate and revitalize the Hamilton LTP Properties. City staff will work with the City Council and community to determine the best process for redeveloping and revitalizing these properties.

On Monday, March 20, 2017, the City held a community meeting at the Hamilton Community Center to discuss the City-owned Hamilton properties and the potential process to solicit developer interest.

At the meeting, members of the community shared their ideas and concerns, and also asked questions. Please review this summary of comments and list of questions and answers received at the meeting. 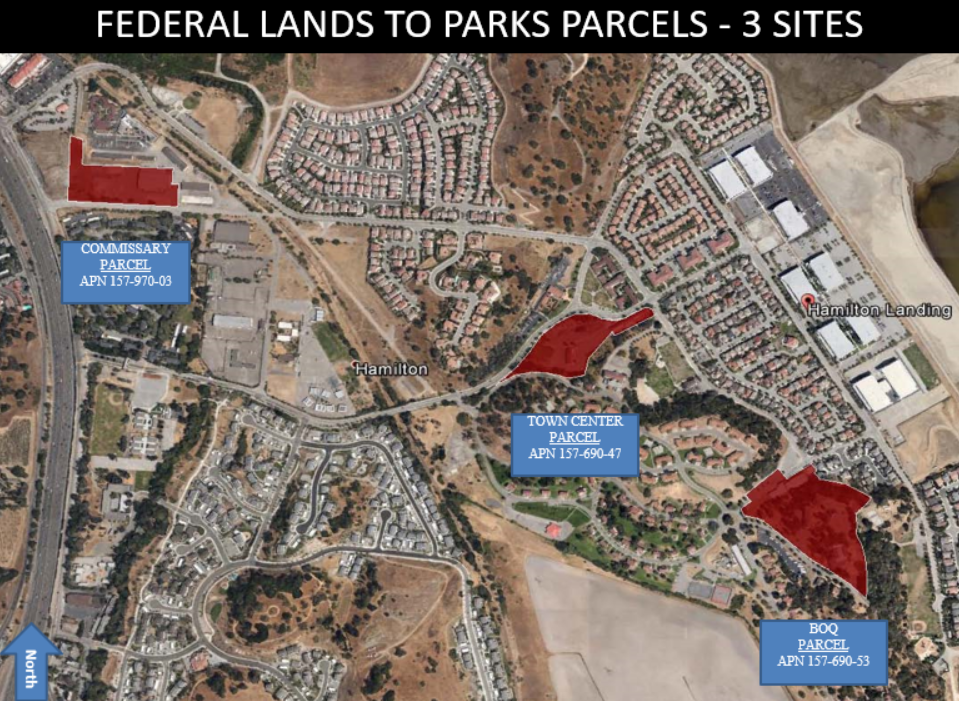 Sign-up below to receive updates via e-mail and/or text message about Hamilton news and events.