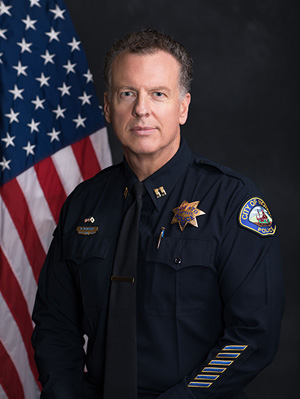 The City of Novato is excited to announce Captain Matt McCaffrey has been appointed as the newest Police Chief of the Novato Police Department. Chief McCaffrey has been with the Novato Police Department since 2015 and has overseen both the Operations and Administrative Divisions, but most recently was the acting Chief of Police for the past several months. Chief McCaffrey will oversee a department made up of sixty-one sworn and twenty-five professional staff.

“I’ve always felt fortunate that I was able to find a place like Novato where the community appreciates the men and women who make protecting their community a priority,” said Chief McCaffrey. “I was impressed with our staff from my first day here and continue to be impressed with their dedication and commitment in providing police services to the Novato Community. I look forward to continuing to work with all City staff to provide excellent service to our community and making Novato a great place to live, work and play in.”

Chief McCaffrey is a thirty-seven year law enforcement veteran who worked thirty years for the Sonoma County Sheriff’s Office and two and a half years for the Sonoma County Junior College District, before coming to Novato in 2015. Matt holds a Bachelor of Science in Criminal Justice Management from the Union Institute and University, and is a graduate of the Federal Bureau of Investigation’s National Academy. He also holds a Management and Executive Certificate from the State of California’s Commission on Peace Officer Standards and Training.

“There was no doubt in my mind that Matt was the right person for the job, his experience and proven record in sound decision making made Matt an obvious choice,” said City Manager Adam McGill. “I know he will continue moving the department in the right direction and provide the same leadership that he has at the captain rank. Not only did I get to see that firsthand during my time as the Chief of Police, but during the transition period during the past few months, I have seen Matt step into the role of Chief of Police without missing a beat.”

Matt will assume his new role on November 25, 2019 and will receive an annual base salary of $209,999. He lives in Santa Rosa with his wife Khristine where they each have three children from a prior marriage.