Last night, after Council remarks and public comment, the Novato City Council appointed Councilmember Eric Lucan as the new Mayor, and selected Councilmember Denise Athas as Mayor Pro Tem. Each will serve in that capacity for one year.

Elected to the Council in 2011 and re-elected in 2015, this will be Eric Lucan's second time serving as Mayor.

Mayor Lucan expressed his pleasure in serving as Mayor of his hometown, and his hope to bring the City and City Council together in the coming year. Following the meeting, the community was invited to join the new Council for cake and refreshments. 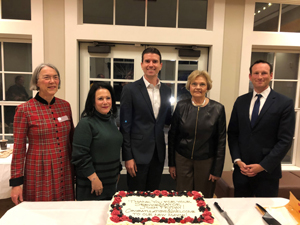 Novato is a “general law” city, which means its governance structure is specified by state law, and its Council selects the Mayor and Mayor Pro Tem (or Vice Mayor) for one-year terms. The Mayor signs official documents, presides at Council meetings, and acts as the official head of the City at public and ceremonial occasions, but has no additional power on the Council.

The first meeting of the new council will be December 11, 2018. The agenda will be posted prior to the meeting.

Video of the reorganization will be available at novato.org/watchmeetings later today.

To stay informed about upcoming Council meetings, subscribe to our e-notification service.